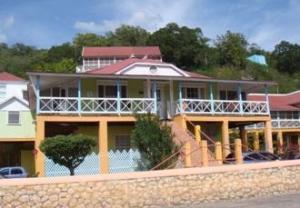 The orgins of the bath is very interesting, rooted in Jamaica’s slave history.

The story begins with a slave owned by a man named Jonathan Ludford.

He was beaten by his master and ran away into the forest .

The slave came upon the Milk River Bath and washed his wounds. The bath soothed his wounds and they began to heal.

Upon returning to the slave village his slave master agreed not punish him if he told him the location of the spring.

The area was then fenced off and this slave was given the duty to guard it. The property that the springs were on, were later willed to the government.

The Milk River baths in Jamaica is said to have one of the highest radioactivity levels of any mineral bath in the world.

Analysis of the mineral spring shows it is more radioactive than the leading European spas, Baden in Switzerland and Karlsbad in Austria.

The bath is reknowned for curing many ailments including – Sciatia, Lumbago, Gout and Liver disorders. The Milk River Bath has 6 public baths and a small hotel of 20 rooms.

The standard time for a baths is 15 minutes in one of the beautifully tiled rooms.

On the compounds you will also find a cocktail bar and restaurant serving some of the island’s wonderful Jamaican specialties.

The Milk River Bath spa is one of nature’s gift to us which should be explored whenever possible.

Next Page »
Destination Jamaica
Create a free website or blog at WordPress.com.